Copyright: © 2017 Kadri SM. This is an open-access article distributed under the terms of the Creative Commons Attribution License, which permits unrestricted use, distribution, and reproduction in any medium, provided the original author and source are credited.

The Zika virus (ZIKV) epidemics, declared by WHO as a global public health emergency in 2016, captured an unprecedented attention of the general public as it is was spreading from Africa to Asia, European countries and Continental USA, mostly by the bite of an infected Aedes species mosquito but also through pregnancy and sexual intercource. The rapid dissemination of information and occasionally misinformation thought the internet and social media, created opportunities for knowledge but also fear and frustration. As in many other countries, there was an increased concern in India and especially among young couples and pregnant women. The challenge to provide awareness in a quick, cost effective, valid way soon emerged. Infographics has been recognized as an innovative tool to approach the audience who searches the Internet regarding public health issues. We prepared Infographics on Zika virus disease (ZIKV) tailored to the language, readability level and culture of local people. Based on this experience, we review the use of Inforgaphics in ZIKV, highlighting the opportunity to make a real impact by using them but also the need for better research tools in evaluating the effectiveness of both electronic and printed version of public health-related infographics, especially in low source settings.

The Zika virus (ZIKV) was declared by WHO a global public health emergency on February, 2016 [1]. Zika virus is a flavivirus of the family of Flaviviridae [2]. First identified in 1947, when isolated from a monkey at the Yellow Fever Research Laboratory in the Zika forest in Uganda. No indications of human pathogenicity were reported until 1953, when the first human infected people were detected. Outbreaks in Micronesia with 5000 cases in 2007 and in French Polynesia with 32,000 cases in 2013 were followed by subsequent outbreaks, until 2015 when increased microcephaly was first suspected to be associated with ZIKV in Brazil [2-4].

The majority of people infected with ZIKV do not show any specific symptoms but mild feverish disease with joint pain and conjunctivitis [5]. Despite that, the current Zika virus epidemic captured a lot of attention of the global public, due to the linkage to neurological disorders and the possibility of transmission from mother to baby in pregnancy [2,4]. As new data kept coming to light, information has been spreading through the internet and other social media channels with unprecedented rates [5,6]. Fast dissemination of the virus in different geographical areas remains a major concern both for in tropical and subtropical areas and for non-endemic regions where there is not herd immunity to ZIKV, but abundant presence of the vector Aedes mosquitoes [7,8].

Concern was also heightened in India and the need to give awareness was urgent. In the present article we report our experience with Zika infographics that were created in the Integrated Disease Surveillance Programme in Kashmir, India and which won a price among other “Innovations and Good Practices, India 2016”. We review the existing literature regarding the behavioural patterns of the public in relevance with internet searching attitudes, along with the effectiveness of the ZiKV Infogaphics.

ZIKV in the World

Among disease epidemics of 21st century Zika pandemic exposed urgent needs for knowledge about the disease. A tremendous increase in circulation of ZiKa was noted with autochthonous transmission in 27 countries (Colombia, Guatemala, Mexico, Paraguay, Venezuela, Honduras and Martinique were among them [7]. Local mosquito-borne Zika virus transmission has been recently reported in the continental United States.

Regarding India, although known of vector competence of Aedes and Culex, no laboratory confirmed ZIKV cases reported, except the anti ZIKV antibodies detection (about 17% prevalence) in the Gujarat and Nagpur, back in 1954. The main public concern in this situation is that this endemic ZIKV maybe still exists in its eco-cycle and potentially reemerge causing human pathogenicity. Unfortunately due to the lack of epidemiological data about seropositivity, any prediction of the impact would be risky in India as well many other countries of the world. And probably that uncertainty raises more concern.

Zika Virus and the Media

Among other emergencies of our century, Zika received extremely high public attention [7]. News coverage or official announcements led every time to peaks of Google searches, twitter or other social media posts and information sharing, creating opportunities to disseminate awareness [9]. Undoubtfully, public health professionals should be alert to take advantage of these short window time opportunities for disseminating accurate information. It is of great importance to be able to offer awareness in a media world full of exaggerations, fear spreading, pseudoscientific claims and invalidated data that were not uncommon in the news coverage and social media sharing post about ZIKV [9,10].

Infographics are graphics that present information (or data) in a quickly, clearly and usually colorful and eye-catching way [11]. It is rather an innovative method of visually given information [12]. Infographics can be a cost-effective way to approach the audience who searches the Internet about information, especially younger age people groups. Although Infographics are not new as a concept [12], they met tremendous increase during the past five years in almost every sector. Isotype arrays, polar area or ‘coxcomb’ diagrams, word clouds, hub or spoke diagrams [12] have all been proved powerful tools in communicating messages. Infographics have been evolved for mass communication including healthcare and public health issues. Data visualization can be complex as it combines principles from psychology, graphic design, and data science to highlight important data in easy-to-understand formats. Interdisciplinary communication and cooperation is essential so that educational materials are tailored to the needs of each region or age group can be produced [13].

Infographics have been extensively used to address this epidemic ZIKV crisis, created by global organization as supplementary tools to approach and inform large-scale audience. As every other traditional written leaflet or educational material, issues as readability, avoiding difficult words or number expressions (for example, avoiding “denominator neglect”, a form of cognitive bias when the reader misunderstands when fractions/ratios are compared) should be carefully considered along with the appealing design and the colors or symbols needed to disseminate the message properly [12]. Public Health Professionals and designers should also take into consideration the unmet needs of the local communities and most importantly the language spoken, the healthcare settings and if, in practical terms, measures that Infographics advises are actually possible to be followed by people.

As many other countries during the Zika epidemic, there was an increased concern of the general public in India and especially among young couples and pregnant women. Although the majority of people speak English, we soon detected the need of Infographics that would be tailored to the language, readability level and culture of local people. We prepared the first Infographics on Zika virus disease (ZIKV) as soon we received the guidelines from the MOHFW both in English and local language (Figures 1 and 2). 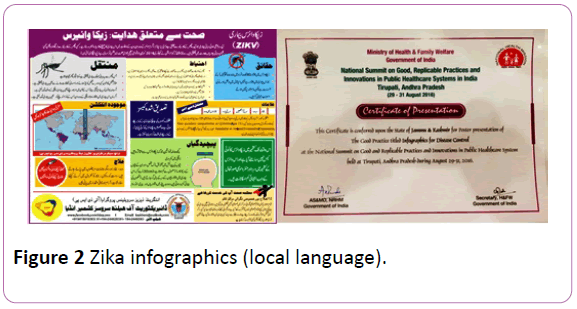 Printed Infographics which included chickenpox, measles, and use of ORS, hand washing, hepatitis B and C were distributed among schools. Increased awareness of school teachers in 2016 due to the Infographics intervention appeared to have resulted in more diagnoses and more complete reporting and increased the number of reported outbreaks of the diseases mentioned above, to the higher levels reported in previous 3 years [13]. Of course, better research tools are needed in evaluating the effectiveness of both electronic and printed version of Infographics in low source settings.

As no extensive research has yet emerged in the field, indicators should be developed for Infographics and other related material. Multilingual innovations should be developed tailored to the national or local unmet needs for awareness and public health message communication.