Base Excision Repair Pathway and Polymorphisms of XRCC1 Gene

Copyright: © 2016 Norjmaa B et al. This is an open-access article distributed under the terms of the Creative Commons Attribution License, which permits unrestricted use, distribution, and reproduction in any medium, provided the original author and source are credited.

Base excision repair (BER) is considered the most important pathway involved in removing DNA damage. Base excision repair pathway is initiated by recognition of a DNA glycosylase (OGG1-oxoguanine glycosylase 1 and MUTYH -MutY homolog)/. This glycosylase catalyzes the cleavage of an N-glycosidic bond, effectively removing the damaged base The DNA backbone is cleaved by a DNA AP endonuclease/APE1/ and creating an apurinic or apyrmidinic site (AP site). DNA polymeraseX-ray repair cross-complementing group 1(XRCC1) fills in the gap with the correct nucleotide. Finally, DNA ligase completes the repair process and restores the integrity of the helix by sealing the nick. Many genes encoding DNA damage repair proteins involved in BER are highly polymorphic. Those polymorphisms have a great influence on pertinent protein functions and they are associated with individual susceptibility into neoplastic events. XRCC1 plays an important role in BER system, which is critical for genome maintenance. Polymorphisms in XRCC1 that result alteration of DNA repair capacity are reportedly associated with cancer risk and treatment response.

DNA is damaged by many factors, and classified as endogenous and exogenous. Endogenous DNA damage is primarily caused by ROS. The environmental agents such as ultraviolet light, ionizing radiation and chemicals cause exogenous DNA damage. However, antioxidant defense systems and multiple DNA repair pathways have evolved to protect cells from oxidative stress and oxidative DNA damaging agents. 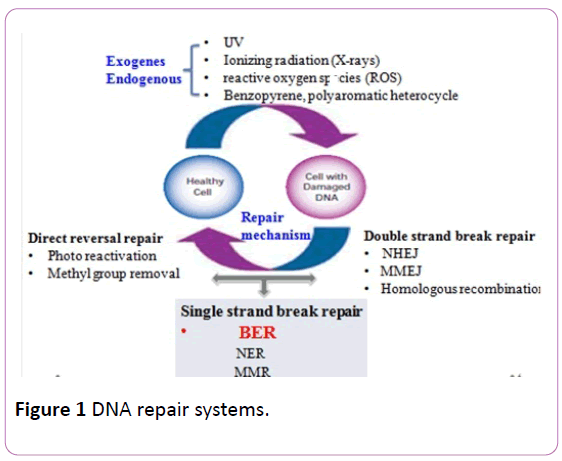 The base excision repair (BER) pathway is the main defense mechanism for repairing DNA damage. BER is involved in the repair of base oxidation and DNA single–strand breaks after exposure to reactive oxygen species (ROS), or alkylating agents. Both oxidized bases and SSBs, which are generated by ROS, are major threats to genetic stability and cell survival; both types of damage accelerate mutation rates and increased levels of chromosomal aberrations. ROSs are produced from endogenous and exogenous sources, including ionizing radiation [3,4].

The BER pathway acts on small DNA lesions or modified bases, where it removes and replaces the damaged base. This process starts with therelease of the damaged base by basespecific DNA glycosylases followed by the cleavage of the sugar-phosphate chain, excision of the apurinic/ apyrimidinic (AP) site by endonuclease action, DNA synthesis and ligation. Enzymes involved in BER include 8-oxoguanine DNA glycosylase 1 (OGG1); AP endonuclease 1 (APE1 or APEX1), which excises the abasic residue; poly (ADPribose) polymerase-1 (PARP-1), which binds DNA containing strand breaks; polynucleotide kinase; the gap-filling DNA polymerase β DNA polymerase-β (Polβ); BER pathway (Figure 2). Figure 2 BER pathway: BER pathway is initiated by DNA glycosylase. This glycosylase is removing the damaged base and generating an abasic site. The abasic site is cleaned by endonuclease or APE1 cuts the phosphodiester bridge in DNA. Then AP(Apurinic and Apyrimidinic site is created. After that,DNA polymerase/XRCC1-fill the gap with the correct nucleotide. Finally, DNA ligase completes the repair process.

SNPs are the DNA base variants present in the human population at a frequency ≥ %. SNPs in DNA repair genes can result in reduced DNA repair capacity, which can underlie a higher mutation rate and increased cancer risk. If a polymorphism is in a repair gene that plays a pivotal role in the removal of oxidative DNA damage, for instance, the resulting reduced repair activity will increase the possibility of disease [5] (Figure 3).

A reduction of XRCC1 protein levels results in decreased repair capacity and in hypersensitivity to DNA-damaging agents and ionizing radiation [8]. Moreover, XRCC1 mutant cells are hypersensitive to DNA damaging agents and display genetic instability after DNA damage. Thus, XRCC1 is required for efficient SSBR and genomic stability in human cells [9]. XRCC1 is a scaffold and multifunctional protein that coordinates both the initial and late steps of abasic site restoration by multiple protein-protein interactions [10]. XRCC1 has biologically significant interactions with poly (ADPribose) polymerase 1 (PARP-1), the gap-filling DNA polymerase β (POLβ), the DNA 30-phosphatase (PNKP), and DNA ligase 3a (LIG3a) in the BER pathway [11]. XRCC1 stabilises OGG1 on an AP site present in double-stranded DNA until APE1 is able to bind to the DNA, allowing the transfer of the DNA substrate from the DNA glycosylase product to the AP endonuclease. Polβ is then recruited by its interactions with APE1 and XRCC1. The binding of XRCC1 with PARP-1 also plays a role in BER. Moreover, XRCC1 is essential for the stabilisation of LIG. Different domains of the protein, which introduces the possibility that all four proteins, namely XRCC1, Polβ, PARP-1 and LIG3α, could form a single complex, mediate interactions between XRCC1 and its BER partners. Some of the interactions between BER proteins are illustrated in Figure 4. Figure 5 The schematic diagram shows the regions of XRCC1 gene and shows the structure of XRCC1 with the locations of most common and well-studied single nucleotide polymorphisms: 777>C, Arg194Trp, Arg280His and Arg 399Gin. Modified from Sterpone et al. [12].

Two common polymorphisms in XRCC1, Arg194Trp and Arg399Gln, are reportedly associated with risk for many cancers, including head and neck, esophageal, gastric, breast, lung, and colon cancer. Furthermore, several investigators demonstrated that individuals with XRCC1399Gln allele have higher levels of DNA adducts and sister chromatid changes than individuals with XRCC1399Arg allele [13,14].

XRCC1 Arg399Gln the sequence variant leading to an amino acid change from Arginine to Glutamine, this XRCC1Gln/Gln has lower activity and is associated with risk factor of Lung and Breast cancer.

The region of exon 6, which locates Arg194Trp polymorphism of XRCC1 encodes a highly conserved hydrophobic linker region between the POLβ-binding and PARP-1-binding domains; consequently substitution of tryptophan with arginine could alter interactions between XRCC1 and either of these proteins [11] (Figure 6). The Arg399Gln polymorphism of XRCC1 is located in exon 10 (region encoding the BRCT domain) which is essential for binding PARP-1. PARP-1 rapidly binds to DNA SSBs and is thereby activated. The poly (ADP-ribosyl)ation of target proteins by activation of PARP-1 results in accumulation of DNA-repair proteins to sites on the damaged DNA [17](Figure 7).

The mutation of the XRCC1 BRCT I domain (substitution from Arginine to Glutamine) showed the reduction of physical interaction with PARP-1. Furthermore, the mutation of the BRCT domain in XRCC1 prevents SSBR and cell survival after treatment of methyl methanesulfonate (MMS) [18].

The individual with XRCC1 399 Gln allele significantly elevated level of sister chromatid exchange in after in vitro exposure to the tobacco-specific nitrosamine 4- (methylnitrosamino)-1-(3-pyridyl)-1-butanone (NNK) [13]. Furthermore, the healthy workers with the XRCC1 399Gln allele showed significant increases of baseline DNA damage measured as tail moment by comet assay [14]. These results showed that XRCC1 399 Gln allele has an impairment of DNA repair capacity.

A meta-analysis of 44 breast cancer case-control studies shows that Asians patients with the XRCC1 399 Gln allele have a higher risk of breast cancer (OR=1.54, 95%CI: 1.18–2.01) [19]. In addition, a meta-analysis of 19 leukemia cases and a control group shows that XRCC1 Arg399Gln was associated with a higher risk of ALL [20]. Furthermore, some investigators show that XRCC1 399 Gln/Gln genotype is associated with the risks of AML [21,22].

Batchimeg et al. [23] reported that patients with MDS and non-Arg/ArgXRCC1 Arg399Gln genotypes (Arg/Gln or Gln/Gln) were more likely than the Arg/Arg patients to have a previous history of radiation. Exposure to ionizing radiation is associated with many cancers, including thyroid cancer, breast cancer, and leukemia as well as MDS. XRCC1 399 non Ar/Arg genotypes was only associated with radiation- related MDS, but with not chemotherapy-related MDS (non Arg: 13.7% vs. Arg: 0% p=0.0018, non Arg: 11.8% vs. Arg: 4.4% p=0.14, respectively).

Ionizing radiation induces oxidative base damages and SSBs, both of which are mainly repaired by two pathways: BER and homologous recombination repair pathways [24]. Thus, defective repair activity of two pathways may contribute to ionizing radiation sensitivity and increased cancer risk. Many investigators have shown that the XRCC1 Arg399Gln genotype influences cellular response to irradiation. The individual with XRCC1 399 Gln/Gln genotype shows increased ionizing radiation susceptibility compared to the other genotypes as measured by prolonged cell cycle G2 delay. The workers with the XRCC1 399 Gln/Gln genotype who were exposed to irradiation have a higher frequency of micronuclei than do workers with the other genotypes.

However, Seedhouse et al. reported that XRCC1 399 Gln/Gln was associated with a protective effect against the development of therapy-related AML [25].

Conflict of Interest and Sources of Funding

The authors state that there are no conflicts of interest relevant to this paper.